When I First Saw Jesus

The first person I ever remember living a life in such a way that drew me to Jesus was a woman named Naomi Hunke.  She was a Sunday School teacher at White Oak Hills Baptist Church in Stone Mountain, GA, and I was one of her lost, arrogant, disinterested students.  I was married, in my late 20’s, and had pretty much given up on church, Christ, and Christianity.

And that something was Jesus.

It has been over thirty years and I have never forgotten how her example of authentic, raw, unashamed devotion to our Lord led me to Him and how she later discipled me through some rather dark times in my young spiritual life— my “dark night of the soul” as they say.  She’s one of my spiritual heroes and all that I am and have become I owe to her childlike faith and obedience to both her Lord and mine.

I can’t thank the Lord enough for bringing Naomi and her husband Bill into my life.

Naomi went to be with the Lord in 2009 at the age of 80.  I have attached her memorial and picture below so you will know a little more about her when we meet again in heaven.  The picture was taken in December 1946, just a few months after her marriage to Bill.

If there are those in your life who have made a difference like Naomi did in mine, be sure to let them know what they mean to you before that opportunity is taken away. 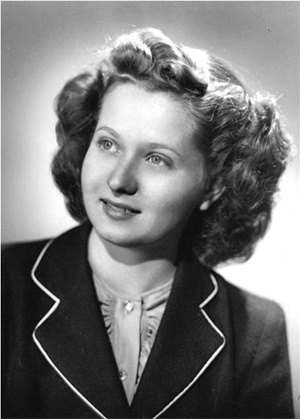 Born Naomi Ruth Savage on a small farm in Wilson, Oklahoma on May 14, 1929, Naomi’s family moved to the drier climate of California in 1943 because of her health. She graduated as co-valedictorian of Theodore Roosevelt High School in Fresno in 1946. On August 29, 1946, she married Edmund William (Bill) Hunke, Jr. who was recently discharged form military service. Bill Hunke was the son of Edmund William Hunke and Clare Lucille Holding.

Naomi earned a bachelors degree from Pacific Bible Institute and attended Fresno State University, and earned Masters degrees in English Literature from Grand Canyon College (now University) and in Education and Sociology from Arizona State University. Much of her college course work was done at night school, after caring for her young family during the day; yet, she was always at the top of her class, graduating with honors and as a member of the Phi Beta Kappa and Phi Kappa Phi honorary societies.

With her husband, Naomi helped to start new churches everywhere that they lived, including California, Utah, Arizona, Alaska, Georgia, and Canada. She taught English and Literature at Alhambra and Carl Hayden High Schools and Grand Canyon College in Phoenix, Alaska Methodist University (now Alaska Pacific University) and the University of Alaska in Anchorage, and DeKalb College in Atlanta, before retiring in Arizona at the Village of Oak Creek, Cottonwood, and Sun Lakes.

Naomi authored three books on Baptist ministries in Alaska, Arizona, and Oklahoma and a fourth book on ministering to seniors, and regularly contributed writings that were published in daily devotional periodicals. Beginning as a young teenager and continuing for more than 50 years, Naomi ministered to shut-ins and people in elder care, nursing homes, and Alzheimer’s facilities, bringing God’s message of hope to people in need. In 2002, Naomi and Bill were named Arizona Volunteers of the Year for their work with assisted-living and nursing home patients.

A memorial service was held at the First Baptist Church of Sun Lakes on October 17, 2009. In lieu of flowers, donations are welcome; they can be made to the Annie Armstrong Easter Offering for North American Missions (North American Mission Board) or Lottie Moon Christmas Offering (International Mission Board) in honor of Naomi’s love for missions. A small graveside service with family members will be held at Sedona Community Cemetery in Sedona, Arizona.